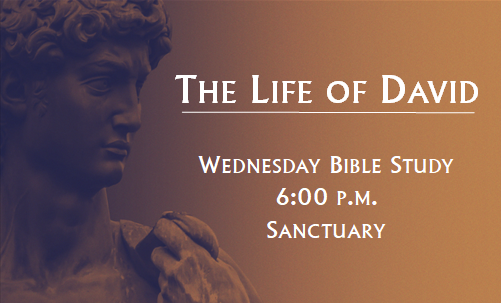 David was a “man after God’s own heart.” What does that mean?

I’ve been fascinated with the life of David for a long time. This narrative offers glimpses into the rise and fall of a man whom God set apart to lead a nation.

It’s amazing to me that God chose David, the youngest of seven sons, to be the person to replace King Saul. If you go back and review some of the backstory in I Samuel (which we will in the series), it will become apparent that Jesse did not believe his youngest son was a contender for the crown. The prophet Samuel visited Jesse who paraded all his sons except the one whom God had set apart for service. The reason? It seems to be that Jesse had overlooked David and did not think him a serious candidate for what Samuel needed.

There are many times when we judge people by their appearances, but God does not. God determines a person’s ability and credibility by their character and heart.

This series offers great lessons about how each one of us should be faithful at what we are doing now, yet remain open to how God can use us in the future.

Despite David’s wonderful victories as a leader, he was not a perfect man and we’ll also take a look at how his sin impacted so many others.

We’ll meet in the Sanctuary and for those join in online, the session will begin around 6:15 PM–DC